Warning: "continue" targeting switch is equivalent to "break". Did you mean to use "continue 2"? in /home/customer/www/stopevaporation.com/public_html/wp-content/plugins/revslider/includes/operations.class.php on line 2715

Warning: "continue" targeting switch is equivalent to "break". Did you mean to use "continue 2"? in /home/customer/www/stopevaporation.com/public_html/wp-content/themes/uncode/partials/elements.php on line 864
 Evaporation Prevention: How to stop evaporation on ponds and lakes

How to reduce evaporation by 98% or more

An effective solution to evaporation losses

Water, one of nature most precious gifts, covers 71% of the Earth's surface, and is vital for all known forms of life...
Read More

There has been a large number of approaches used to attempt to reduce evaporation losses from surface of water bodies...
Read More

Water, one of nature most precious gifts, covers 71% of the Earth’s surface, and is vital for all known forms of life. The total water resources on the planet are estimated to be around 1360 million cubic kilometers. 96.5% of the water is found in seas and oceans, 1.7% in groundwater, 1.7% in glaciers and the ice caps of Antarctica and Greenland. Only 2.5% of the Earth’s water is freshwater, and 98.8% of that water is in ice and groundwater. Less than 0.3% of all freshwater is in rivers, lakes (where we get our drinking and irrigation water from) and the atmosphere.

In the past, fresh water was often readily available and cheap, because it was considered an unlimited resource and easily replenishable. Despite technological advances and better management, it has become evident that fresh water supplies are much harder to maintain than previously thought and that it is strongly dependent on spatial and temporal variation of precipitations. One of the most common techniques used to mitigate the reliance on long term weather predictions and precipitations is to construct big storage in natural or artificial tanks and lakes. But due to high temperatures and arid conditions in many southern climates, the evaporation losses have been found to be important. Therefore, it is very important to minimize evaporation losses in those storage water bodies. When you consider that less 0.1% of the freshwater on the planet is stored in lakes and man-made manufactured structure and the predictable scarcity of water, the need for prevention of large evaporation losses is of great significance.

Nowadays, it is estimated that 70% of worldwide water use is for irrigation, with 15-35% of irrigation withdrawals being unsustainable. It takes between 2,000 and 3,000 litres of water to produce enough food to satisfy one person’s daily dietary need, compared to only 2 to 5 liters required for drinking purposes. Another 22% is used in the industry. The main industrial users include hydroelectric dams, thermoelectric power plants, which use water for cooling, ore and oil refineries, which use water in chemical processes (cyanide ponds), and manufacturing plants, which use water as a solvent and cooling. The last 8% is used for household purposes. All water users share one common point: 95% of all the fresh water withdrawals are pulled from large water storing sites which suffer from excessive evaporation.

In the past years, intense agricultural practices, rapid increase in population, industrialization and urbanization is resulting in water scarcity. The situation is becoming more critical in arid and semi arid regions especially during droughts, when general scarcity of water is compounded by high evaporation losses from open water surfaces of lakes and reservoirs. In 2011, Texas experience the worst single-eyar drought in history, with entire reservoir going dry, large fish kills and complete loss of crops. During the severe droughts Europe (a typically temperate climate) witnessed in 2012, electrical power plants were shut down due to lack of cooling water and grain prices soared 20%, affecting the food supplies.

Assessment shows that by 2025, our water surplus will be only 2.7% of all utilizable water resources (meaning we will be using 97.3% of all that is available!). With today’s strain on water resources, it is imperative to conserve water by reducing evaporation losses, especially in drought prone area. Since most of our water comes from lakes and reservoir, controlling evaporation on those is where we should focus most of our efforts.

A report issued in November 2009 suggests that by 2030, in some developing regions of the world, water demand will exceed supply by 50%. It is estimated that by 2025, half of the world population will be already facing water scarcity. With less than 0.3% of all freshwater in rivers and lakes, our main water sources, it is becoming imperative to find ways of controlling evaporation on large water bodies

Evaporation is an essential part of the water cycle (evaporation – precipitation – runoff). The sun energy produces evaporation of water from oceans, lakes and moisture in the soil. Evaporation of water occurs when water molecules that are in constant motion have enough energy to break through the water surface and escape into the air. The water vapor formed rise up and forms cloud. Evaporation in general is a beneficial phenomenon in regulating the global water balance through the hydrological cycle and evaporation of water over the ocean is crucial to the water cycle. But it is also the same phenomenon that contributes to massive losses from fresh water bodies. Control of evaporation from land bases water bodies, from where we withdraw most of our freshwater needs, is the main goal of water conservation solutions we must consider. This becomes significantly more important in arid regions, where water scarcity is already a common problem.

Temperature of the water: if the water is hotter, then its molecules have a higher average kinetic energy, giving them sufficient kinetic energy to overcome the liquid-phase intermolecular forces and allowing them to escape. The rate of emission of molecules from liquid water is a function of temperature. Higher temperature means a higher evaporation rate.

Flow rate of air / Wind : This is in part related to the concentration points above. If fresh air is moving over the substance all the time, then the concentration of the substance in the air is less likely to go up with time, thus encouraging faster evaporation. This is the result of the boundary layer at the evaporation surface decreasing with flow velocity, decreasing the diffusion distance in the stagnant layer.

Atmospheric Pressure: Evaporation happens faster if there is less exertion on the surface keeping the molecules from launching themselves.

In the US, the National Weather Service measures the actual rate of evaporation from a standardized “pan” open water surface outdoors, at various locations nationwide. Others do likewise around the world. The US data is collected and compiled into an annual evaporation map. The measurements range from under 30 to over 120 inches (3,000 mm) per year.

How to control and reduce evaporation

There has been a large number of approaches used to attempt to reduce evaporation losses from surface of water bodies. Every scientific approach tries to affect one of the main factor described above: reduce the exposed surface; decrease the water temperature; decrease the wind effect; etc… Since the meteorological factors affecting evaporation cannot generally be controlled under normal conditions, the focus has been placed on suppressing evaporation by physical and chemical means. The effectiveness of each methods varies but some are far more efficient than others. These approaches include:

Underground storage are one of the most if not the most effective way to drastically reduce evaporation by completely eliminating several factors such as: no more wind, no more water temperature rise due to the sun and high water concentration in the air inside the underground storage. The main advantage of this method is that the loss of valuable land area is completely avoided. However, the disadvantage of this method is that it requires high capital cost due to the size and engineering of the infrastructure used for the storage. This can be diminished by storing the water in the aquifer. But by doing so, water needs to be pumped for use, which entails additional pumping costs and large energy consumption.

Chemical WER (fatty alchohol) form a thin film have been found to be effective for reducing evaporation (some studies cites 46% reduction) and fairly safe to the environment (biodegrable and permeable to oxygen). However, wind velocities and temperature does affect them and they are generally not used when winds exceed 10-15 km/h or when the temperatures exceed 40-42C. They are also expensive to purchase and apply and they fall into a short term measure.

Reducing the exposed water surface works best if some shallow portions in the reservoirs can be easily separated from the rest of the lake. The method consists in building dykes to isolate the shallow portion of the reservoir and divert the water to deeper area and is somewhat effective in drought prone areas. Evaporation losses are eliminated in those section, thus reducing the evaporation losses over the entire reservoir. Unfortunately, it is dependent on the reservoir topography and can be somewhat costly to implement.

Wind breakers are another method that can only be employed on small water bodies. It consists in planting trees or other plants that acts as wind breakers, thus reducing the movement of air over the water surface, greatly reducing evaporation. On small ponds, trees can also provide some shade which will further reduce evaporation. However, this solution is limited to small reservoir. On big reservoirs, the wind breaker effect is limited to a short distance from the rim of the reservoir, leaving the inner water exposed.

Covering the surface of water bodies with a fixed or floating covers considerably reduces evaporation losses. These covers reflect energy inputs from the atmosphere and create a layer that prevent transfer of water vapour to the atmosphere. Fixed covers have been used for small and medium storage. They have the advantages to be somewhat affordable. One of the main drawback is durability as dust, leaves and other debris accumulate on top. They are also prone to tear (especially under heavy snow loads or heavy rains) and maintenance is expensive. For large water surfaces, floating mat and spheres have been used. It has been reported that small floating polystyrol sphere reduced evaporation by 80% in experimental tanks. Further studies using larger 100mm polyethylene sphere have also shown reduction in evaporation by 90%. Both spheres have the added advantage to reflect solar energy and eliminating potential algae bloom. To learn more about the potential harmful effects of algae, visit pond-algae-control.com.

Despite having a higher capital cost than wind breakers or partial dyke covers, complete reservoir covers offer the best cost /efficiency ratio out of all the existing methods to effectively reduce evaporation. While quite as not effective as enclosed underground storage (99+% reduction in evaporation losses), some modular floating covers are getting very close (98%) while being substantially more affordable to install and maintain. The most effective modular cover currently on the market, suitable to most reservoir and water containment structure in windy areas with fluctuating water levels, is the proprietary Rhombo cover from Advanced Water Treatment Technologies.

Compared to other modular floating covers, it is ideally suited for larger reservoirs because it will resist high winds and does not stack even with strong water currents. This cutting edge cover is similar in simplicity as other sphere covers except that it does not have the gap in between the sphere.

Annually, an estimated 495,000 cubic kilometer of water evaporates into the atmosphere. Approximately 990 cubic kilometer or 261,530 billion gallons are lost through evaporation of fresh water reservoir. Even preventing a fraction of this evaporative loss would permit to replenish aquifers, lakes and rivers. Covering reservoir in drought prone areas and large water bodies in arid and semi arid climate is essential to preserve water supplies in those areas. With technologically advanced modular covers able to prevent up to 98% of evaporation losses, there are cost efficient tools to help us maintain our fresh water suppliers. 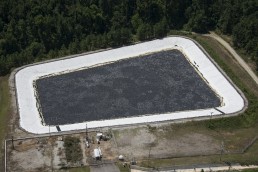